Viewing back on the first week I am satisfied with the artwork I have done. The organization, however, was not optimal and I am still missing the first three days. Keeping up with the list is going well. Some days I have to do more research than on the other days. There are classes which I feel comfortable with, mostly the ones with cloth and leather armor. All the heavy armor and weapon classes are totally out of my comfort zone and I have to learn a lot before I can even start with a sketch. The easier days do feel like having little breaks in between which keeps me motivated.

The list for the second quarter of Inktober is:

The first two ones were actually prepared on Monday. I have troubles to catch some free time during the weekend. It is a bit difficult to squeeze in drawing time, when all the other stuff that is piling up during the week (mundane housework) or visiting people finally gets some attention. I don't know yet how to fix this problem, and doing two pictures in a day is too much work with all the research included.

I have prepared a warlock gnome, but will probably jump over the sorcerer and continue directly with the wizard tomorrow.

Ranger are in nature by wind and weather, have a proficient knowledge of the animals and are skilled in surviving outdoors. I thought it would be cool to have a snowy scene so I can give her a cool fur coat. As an animal companion I gave her a badger. 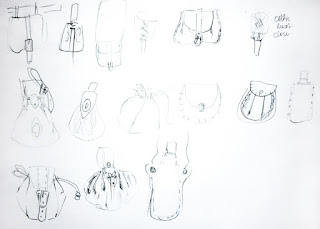 Bags and pouches
I wanted to give the ranger lots of bags and pouches to carry on the belt, chest and back. The research for medieval bags was great and I found some really nice pieces I would even like to have myself. But at the end I did not have enough space to draw all of them, the picture is quite small. It would have probably also taken far too long. 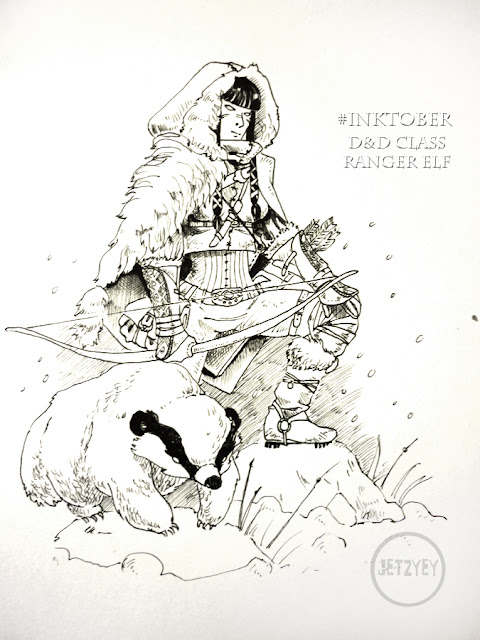